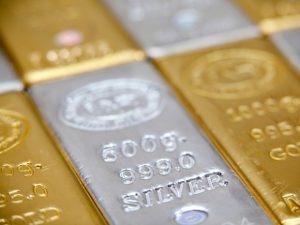 Gold was steady in early trading on Monday as equities firmed and the dollar strengthened on expectations the tax-bill will pass. Republican leadership says that the House expects to pass a tax-bill this week, with a Senate vote expected Wednesday.

Expectations that the tax-bill would foster economic growth have bolstered the dollar and weighed on Gold. â€¦â€If the whole thing (tax reform) falls apart at the last minute, it would be hugely positive for Gold, but I think that is unlikely,â€ said analyst Carsten Menke of Julius Baer.

If the tax-bill should pass, analysts believe that while Gold may dip slightly, it’s already largely been priced into the market.

Meanwhile, safe-haven Gold ticked higher on Monday after retired Chinese army general warns that the Korean peninsula could be at war within the next three months. Lieutenant General Wang Hongguang urged China to mobilize its missile defenses in anticipation of conflict in the region.

â€œThe war on the Korean Peninsula might break out any time between now and March next year,â€ said Lt-Gen Wang.