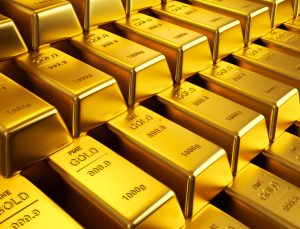 Los Angeles CA, January 24 (Tangible Investments) â€” by James Oâ€™Dell â€” Precious metals prices turned sharply higher on Wednesday. The dollar falls after Mnuchin comments Gold soars. Gold is up 1.01 percent to $1,354.50 an ounce after gaining $7.80 on Tuesday to close at $1,340.90 an ounce.

Gold soared in early trading Wednesday as the dollar fell on comments by Treasury Secretary Mnuchin. Secretary Mnuchin, upon arriving in Davos, Switzerland said that a weaker U.S. dollar is beneficial for the U.S. economy.

Mnuchin was quoted as saying: â€œObviously a weaker dollar is good for us as it relates to trade and opportunities.â€ The dollar promptly tanked, hitting 3-1/2 year lows while pushing Gold to 4-1/2 month highs.

Crude oil prices at $65.00 a barrel are not far below the more than three year high reached last week. The rally in oil is underpinning the latest bullish moves in the precious metals.

“We’re honing in on the 2017 high around $1,357, which is going to be the next big level.” said Ole Hansen, head of commodity strategy at Saxo Bank.

In the meantime, Silver hit a 3-1/2 week low of $16.73 on Tuesday but jumped more than 2 percent on Wednesday after the U.S. imposed substantial import duties on solar panels. Silver is a crucial element in the manufacture of Solar panels and a key sector of demand.

“Silver is waiting to pop. It has become increasingly boxed in, but if we can take out this $17.45 area, then Silver looks like having broken a downtrend going back quite a bit,” said Hansen.

Meanwhile, by a final vote of 85 to 12, the Senate on Tuesday confirmed Jerome Powell as the 16th chairman of the Fed. Although Powell was confirmed Tuesday, he wonâ€™t assume the duties of the office until February when Janet Yellenâ€™s term expires.